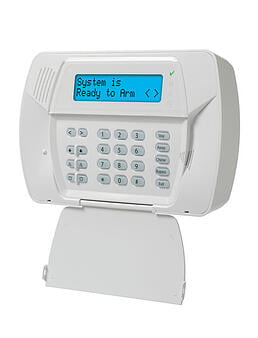 The DSC Impassa 9057 is a robust wireless home security system and is one of the finest self contained cellular alarm systems available today.

If you do not have home phone service... no problem. The DSC Impassa 9057 has a built in cellular communicator and communicates directly to ADT Central Station Network without using a traditional phone line.

With cellular alarm communication being the DSC Imassa 9057's primary means of communication, you also do not need to worry about a burglar cutting your phoneline like you do with traditional security systems.

One of the concerns some customers have with wireless self contained security panels is having a burglar tear the security system from the wall. With the traditional phone line communication of most self contained security panels, if a burglar were to pull the security system off the wall the unit would not communicate to the Central Station. However, with the DSC Impassa 9057's internal cellular communication and battery backup it can still communicate to the ADT Central Station Network even if it is torn from the wall. It also has a tamper switch on the back of the unit that immediately sends an alarm signal if the unit is even slightly pulled away from the wall.