It is believed that these break-ins are related to 4 other similar car dealership burglaries that resulted in over 20 cars literally driven off lots. The arrests made after the two men were caught on ADT Pulse VIDEO led to 6 cars being recovered with minimal damage. It is a harsh fact that cameras are becoming an integral part of businesses ownership.

The upside is that advancements in technology have made once expensive systems, affordable. A system that used to cost upwards of $4,000 can easily be replaced by an ADT Pulse Cameras system with 3-4 cameras for less than a thousand dollars. You get real time live video feed that can be accessed by most web-enabled devices. Recordings can be triggered by events such as motion, alarm activity or someone opening a door. These clips can be sent to you by text and/or email so that you are immediately aware of situations and able to alert authorities.

August 17th, two men broke in and made off with luxury vehicles from Brand motors on South El Camino Real. Five days later, two men, believed to be part of the same group of thieves, hit Trax Auto, right down the street. They stole 40 sets of keys and returned the next night to steal 2 high end cars. The owner had invested in an ADT Pulse Cameras and the 2 men that broke into Trax Auto were caught on surveillance video, identified and arrested. 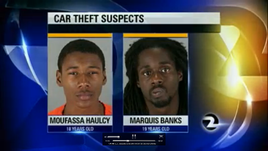 To date, 6 luxury car dealers in the bay area have fallen victim to this group of thieves. The ADT Pulse camera system captured a 30 second clip of the car theft that was saved to an on-line account to give to the police. The cameras have a motion sensor that triggers a 30 second recorded video clip. Owners are also able to have video clips text or emailed to them remotely. Cameras just like this are being used everyday to put bad guys behind bars.

In early August, a Walnut Creek resident used her ADT Pulse front door camera to catch a burglar. When her camera was triggered by motion on the front porch, it recorded a video clip that she posted to NextDoor.com to alert her community of the theft. Nextdoor.com is a site that creates virtual on-line communities where police and local citizens share up-to-the-minute information. Sharing her video clip of the theft in action allowed the vehicle used in the burglary to be spotted and reported to the police resulting in an arrest. The video ended up all over social media and that did the trick. One neighbor commented about the quality, "Your video camera image quality is fantastic. Do you mind sharing make/model info?"

Many factors have made it more realistic than ever to assist bringing criminals to justice. Surveillance systems are more affordable than ever before and offer quality images that can be easily shared. Police departments have video enhancement equipment to help identify suspects. Social media then allows police departments and the average citizen to publicly distribute information in real time. With these two ingredients, communities are empowered to take a bite out of crime. In both these stories, it was a citizen's actions that resulted in the arrests.

You have all seen America's Most Wanted. The fact is that only so many crimes will get on TV for nationwide help. However, with sites like Nextdoor.com, Facebook, Twitter, Nixle, that signs you up for alerts that apply to your local community, and others, communities can ban together and take a localized approach to fighting crime. Social Media puts real time communication at your fingertips and is already being used to catch bad guys and keep neighbors in touch with what is going on in their communities. Read more here for other examples of solved crimes using social media.